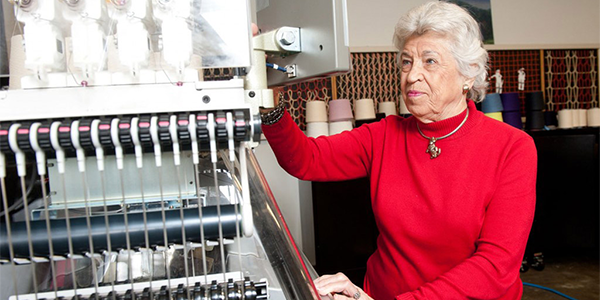 She speaks eloquently about the industry and enthusiastically about details such as types of fibers. Her hands grow animated and the retired professor in her emerges.

"Textiles are so important," she says. "You can teach any subject— history, civics, science or economics—with textiles as the foundation. They're a necessity in everything, from roadways and airplanes, to medical uses."

Walking the hallways and laboratories with Frances offers hints, too, of the impact she made as the college's first female faculty member. Former students and colleagues from her 1963—1993 career greet her, and she names several who now lead textile companies and organizations.

It is important to Frances that she continues contributing to education at NC State. In 2012, she began exploring how she could do so through a legacy gift. In 2014 after discussing possibilities with her advisors and the university, Frances chose to establish a Charitable Remainder Trust with the North Carolina State University Foundation. Instead of funding the trust with cash, she funded it with an unwanted vacation home. Once the vacation home sold, the trust began providing her income for life. The trust will ultimately support endowments (her legacy) for the College of Textiles and for NCSU Libraries. The textiles endowment portion of the trust will benefit graduate fellowships, an often-unmet need; she chose to support the libraries, too, in order to make a difference for all students and faculty. As an added bonus, Frances received a charitable tax deduction for her generous legacy gift.

"I don't have children, so this is a way that I can really give back and help young people," Frances says. :And I was born during the Depression, so I've always worked hard and been careful with money."

Frances grew up on a farm in Spivey's Corner, Sampson County. Her parents, Jesse and Esther Wilson, put a premium on education for their seven children. After graduating from then-East Carolina Teachers College, Frances taught home economics at Nash and Wake County high schools.

As a young girl participating in 4-H, she had won dressmaking competitions, and her passion within home economics was sewing and textiles. After 11 years of teaching, Frances decided to return to school, earning a graduate degree in textiles from UNC-Greensboro and completing an assistantship at Blue Bell. Her late husband, George, worked in farm equipment sales; through university connections, he heard of a job opening at NC State.

Hired as an instructor, Frances eventually retired as assistant professor of textile and apparel technology and management. In the 1970s, she became the first female member of Phi Psi national textile professional fraternity.

"I was in the right place at the right time," she says, laughing. "It wasn't always easy and there weren't many female students for the first few years. But I was very fortunate to get a job at the College of Textiles. I really enjoyed it."

Frances taught labs specializing in fiber microscopy—which she felt really challenged students—and the freshman-level introduction to textiles, as well as weaving, knitting and nonwoven labs, and a course in fabric formation systems. Few students earned textile degrees without passing through one of her labs.

Her proudest accomplishment was developing and teaching a course on textiles' end uses. "That really tied it all together. You aren't just making yarn and fabric—you're actually making something useful from them," she notes.

About 90 percent of students in her former department are women, the majority of textile engineering, chemistry and science students are women, and the college has many female faculty members. "And technology, more manmade fibers ... a lot of things have changed," Frances says. But her generous legacy gift will ensure that her impact at NC State remains a constant for years to come.