A Legacy of Leadership 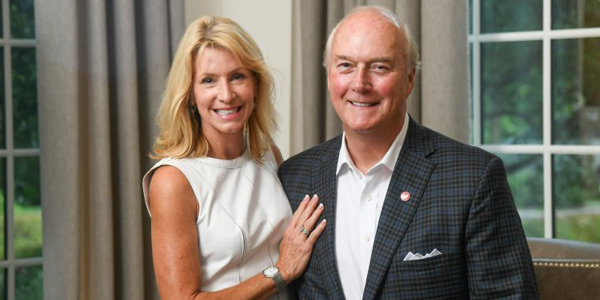 
It all started with the Wolfpack Club.

Charlie Stallings graduated from NC State with a degree in business management in 1977, and to maintain his connection with his alma mater's athletics teams, he became a donor soon after.

"I enjoyed football games and wanted to continue to get tickets, but then it became about doing more for the university," Stallings said of his evolving motivation for support.

"More for the university" has taken many forms. In the 1990s, Stallings worked with the Alumni Association to organize the NC State Club of Richmond, where he and his wife Jeanne still live. One of the club's first projects was launching an NC State-branded Virginia license plate. To help promote the initiative and increase recognition of NC State in his home state of Virginia, he donated funds so area alumni could get the plate for free.

As Stallings' involvement with NC State deepened, his giving has expanded to include endowed support for strategic priorities. When he was approached about supporting scholarships at the Poole College of Management, he reflected on his own experiences as a student. "I recognized how important it was to have some assistance," he said.

In 2012, he and Jeanne endowed a fund of their own. The Charles E. Stallings Family Scholarship supports students at the Poole College of Management who demonstrate financial need.


For Stallings, a senior vice president with BB&T Capital Markets' Institutional Fixed Income Group, the fact that an endowed scholarship will help students not just for one academic year but for generations to come is crucial. He knows that the importance of the university having funds to invest in order to generate income for uses such as scholarships in perpetuity might not make for the flashiest pitch.

However, endowments are critical to NC State's goals. "That's what's going to make this university even greater: having the funds available to attract and retain the best faculty and the best students," he said.

NC State's Think and Do the Extraordinary Campaign has created multiple opportunities for the Stallings family to increase their impact. They have given back to the university in three vital ways: providing annual gifts to the Wolfpack Club and the Poole College of Management, strengthening their endowed fund and making a documented estate gift.

Stallings is a strong proponent of the benefits of planned giving, both for potential donors and for the university. He recently created a perpetual trust that will benefit the Wolfpack Club and the Stallings Family Scholarship Endowment. "Giving from your estate is pretty darn easy," he said. "People hear the phrase 'planned gift' and they think they'll have to change their estate plans, use their attorneys."

But, he explains, it can be as simple as designating NC State as the beneficiary of all or a portion of a life insurance policy. "It's a smart way to give, and it's long-term giving that the university can count on. I think this is so important, and I hope others will join me to include NC State in their estate planning."

In addition to his philanthropic partnership, Stallings has established a record of dedication and leadership to the university. He has served as president of the NC State Club of Richmond, as a member of the NC State Investment Fund Board of Directors, and as former vice chair and current chair of the NC State Foundation Board. He enjoys working with his fellow board members and connecting with people who love NC State and are passionate about setting an example by giving back.

Giving back through his involvement with students at the Poole College of Management has also been a gratifying experience for Stallings. He is excited by the college's innovative approach and many accomplishments. "Every time you look at the news about Poole College, you see a positive trend," he said. "Being part of that is important. Between the online MBA program , the Supply Chain Resource Cooperative and the Entrepreneurship Clinic - there's so much going on."

At a recent showcase event, a first-year student expressed an interest in meeting Stallings to learn more about investing, credit markets and bond sales. They've spoken by phone several times since. "That thirst for knowledge is just fantastic," Stallings said. "It's such an honor for me to be able to help."

The impact of Stallings' commitment to serving current and future alumni through leadership and philanthropy can be seen across NC State. What began with wanting to stay connected to NC State athletics has grown into campus-wide support and a legacy that will endure for years to come.

"As my mother would say, those who give have all things," Stallings said. "I've learned how true that really is through my involvement at NC State."