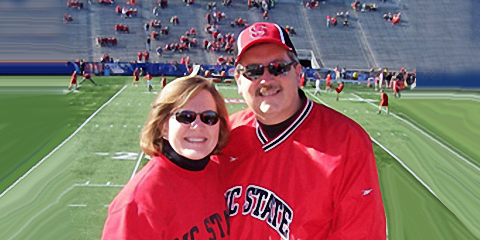 When in place, the endowment will provide scholarships for incoming freshmen with first preference going to students from Caswell County. The awards are discipline neutral and will be renewable for up to three additional years given academic merit and progress.

Both Ken and Sandra are Caswell County natives. Both lost a parent at a relatively young age. Both came from families long on love and support, but short on financial resources. Through hard work and perseverance, they finished their degrees at NC State and went on to successful careers at telecommunications giant, Nortel Networks.

"We have been so blessed in our lives," says Ken, "and we simply want to share some of our success with others from our native Caswell County, so they may reach their potential in life."

Because of their ongoing generosity over the years, the Tates are recognized as members of The W. C. Riddick Lifetime Giving Society. Ken adds, "Like many NC State alumni, most of our giving over the years has gone to the Wolfpack Club to support athletics. That is all well and good, but since joining NC State as a development officer, my eyes have really been opened to the needs on the academic side of the equation. Success on the academic front is not so different than it is on the athletic front; it takes tremendous support to reach that elite status. We felt it important that we share our success in a balanced and responsible way."