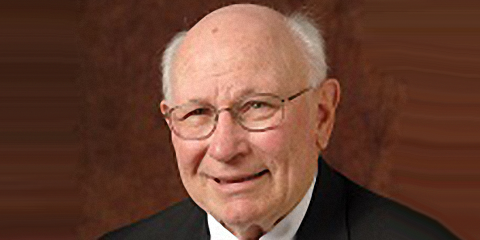 "Besides God and family, NC State has been the primary constant for most of my life. I have received NC State benefits in education, recreation, profession, friendships and family on a continuing basis since my childhood in New Bern listening to WPTF's Ray Reeves extolling Coach Everett Case and the Wolfpack," says Bob Kennel '58. He was the first person in his family to attend college receiving the only $4,000 Talent for Service Scholarship (the forerunner of the Caldwell and Park Scholarships).

While at NC State, Bob had the good fortune to play baseball, basketball and football under five NC Sports Hall of Fame Coaches—Vic Sorrell, Everett Case, Earle Edwards, Vic Bubas and Cary Brubaker. In fact, Bob was talented enough to earn the opportunity to play baseball for the Baltimore Orioles. In his junior year, Bob co-founded Delta Sigma Phi fraternity and became the first president. Bob served as the Wing Commander of 1100 ROTC Cadets before entering the US Air Force where he used his bachelor and master's degrees in nuclear engineering in service to his country. His wife, Elaine Long Kennel, whom he met in Albuquerque, New Mexico, was by his side as he raised his four children and traveled the country developing independent power and alternate energy projects around the United States.

Even while pursuing a successful career, Bob was involved with his alma mater hosting NC State backyard picnics for 22 years in the Washington, DC area with 200 to 400 people in attendance each year. When the NC State Parent's Association was formed, it was natural for Bob to serve as its first president given the numerous relatives who matriculated at NC State, including daughter Susan K. Bull ('89 B.S and '94 D.V.M.) who married to Adam W. Bull ('89 B.S. ), as well as son Philip ('92 B.S.) who married Kathy Bell Kennel ('89 B.A.).

Bob was the Alumni Association President when the Park Alumni Center was first planned. In fact, the upstairs foyer was named in recognition of his contributions. A lifetime member of the Friends of the Library and former board member, he also gives back through Caldwell, Baseball and Earl Edwards scholarship endowments. Bob made a ten-year commitment to lead BASE (Beyond Academic Support Excellence program) an initiative to provide new technology funds, continuous mentoring from the Varsity Club, and improved NC State sportsmanship. He is also a Wolfpacker with lifetime seats for baseball, basketball (men's/women's) and football.

Like many business professionals, Bob accumulated a large IRA that is subject to income taxes as he takes his mandatory required withdrawals. However, Bob directed his financial advisor to make the required minimum distributions directly to NC State for the Alumni Center Campaign for Excellence, the Lonnie Poole Golf Course, the Engineering Dean's Fund, and the Academic Support Fund. Because the 2006 Pension Protection Act allows for the Charitable IRA Rollover, these distributions were not taxable to Bob and therefore did not increase his taxable income. He was able to satisfy pledges to support his many interests at NC State while meeting the requirements of the tax law.

Anyone who has met Bob will agree there is no doubt that he is red and white for life. "I never had a goal to gather wealth, which means I don't have 'big bucks' for many worthy NC State causes. However, I have tried to compensate by giving back to NC State my loyalty, my time, and my heart. As social animals we need to belong. I belong to God's good earth and church, to my family of four children and six grandchildren, to this great nation, and I proudly belong for life to the Red and White of NC State."

Since your IRA gift benefits may be different, you may want to contact us to discuss an IRA gift.