Paving the Way for Adventures 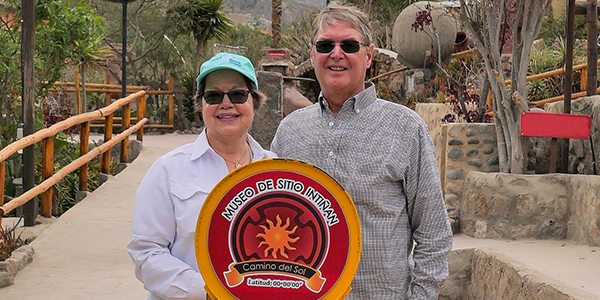 The Fitches on the equator at Museo de Sitio Intinan, Quito, Ecuador.

Higher education has helped lifelong learners Jane and Johnny ('76) Fitch enjoy successful careers followed by retirement travel. By giving back to NC State, they hope to provide students with extraordinary, well-rounded experiences of their own.

For decades, Jane and Johnny ('76) Fitch each enjoyed successful careers that also allowed them to plan steadily for a future phase two of their lives: a retirement filled with travel adventures.

Then the COVID-19 global pandemic gripped the world and interrupted those adventures. The couple found themselves at home and thinking again about their future — but also about their past and the institutions that shaped them. They began to talk about connecting all of that through philanthropic giving.

"During this time when we couldn't travel, we worked on taking care of a lot of paperwork and knew it was a good time to get our estate planning documents updated," Jane said. "That's when we put our heads together and decided that whatever is left when we're finished, we would like [that money] to go to the educational institutions that meant a lot to us and played a key role in our successes."

One of the Fitches' decisions was to establish the Jane and Johnny Fitch Endowment for Experiential Education at NC State's College of Engineering through their estate plans. Once fully endowed, the fund will support scholarships for experiential education experiences among students pursuing an undergraduate degree in the Department of Materials Science and Engineering. Those learning experiences could include conference attendance, study abroad, internship opportunities and more.

Their estate gift through NC State's Think and Do the Extraordinary Campaign also will create the Jane and Johnny Fitch Scholarship Endowment to support need-based scholarships for students pursuing an undergraduate degree in materials science and engineering, the program of which Johnny is an alumnus.

"I remember when I was a student, I worked my way through college," Johnny said. "I certainly didn't have any extras, but I could work part-time on the weekends and during the summer and pay for my schooling — you can't do that now."

He fondly recalls the impact NC State had on him and his future.

"The critical thing was, my time there taught me how to learn," he said. "Once you learn how to learn, then it makes life more interesting — whatever the challenge."

Johnny also spoke about his own journey as a first-generation college student and how, as an NC State senior, he was able to take a trip to Chicago, paid for by his department. The trip marked his first time on a plane and in a big city. He and Jane hope their support means other students can have those types of life-changing experiences.

"We want students to have experiences that enrich their education," he said.

For Jane, who spent her career in medical education, directing their resources toward student support made perfect sense. The Fitches have also chosen to make gifts to other higher-education institutions that have had an impact on their lives.

The two were dedicated to their careers. Johnny recalls Jane getting up at 4:30 a.m. for work, and he would join her as well. They often put in long hours, sometimes seven days a week.

Johnny worked as a metallurgist for more than a decade after NC State, doing failure analysis in the oil and gas industry. He received his MBA from Rice University in 1989 and spent the rest of his career developing managerial software. He calls himself a "problem solver," even having built Jane seven different software programs to help her in her own career.

The two are high school sweethearts who both grew up in Durham, where they first met in the library at Northern High School. Jane attended nearby Duke University. Johnny, who still says today that his number-one goal has always been for his wife to be happy, moved around the country with Jane as she pursued a nursing degree, then a graduate program for nurse anesthesia, then a doctorate in medicine, followed by a residency and fellowship in cardiovascular and thoracic anesthesiology.

Jane retired from a career in academic anesthesiology, having served as residency director, fellowship director, division chief, vice chair and chair at four major academic institutions from the East Coast to the West Coast. She is a past president of her national specialty organization, 2014, only the second female president since the group's inception in 1905. She is also past president of her national academic organization, 2012-2014.

All of that hard work paid off in successes and in their retirement thus far. Just before the pandemic hit, the two had traveled to eight countries in 2019 and three countries in early 2020. Destinations included Cuba, Peru, Ecuador, Cambodia and Thailand, among others. They also visited 30 state and national parks in that period.

"Our motto is, the world is our classroom," Jane said. "We love traveling; we did little bits of traveling while we were working, but we couldn't take long trips.

"Now we can be gone for weeks."

They'll pick back up where they left off as the pandemic eases, with plans to fit in the trips they missed out on in 2020 and 2021 as well as new adventures.

Being able to pursue those dreams is another part of what inspired the Fitches' philanthropy. Johnny talked about the couple's own modest middle-class beginnings and their desire for others from similar circumstances to be able to afford a complete college experience today.