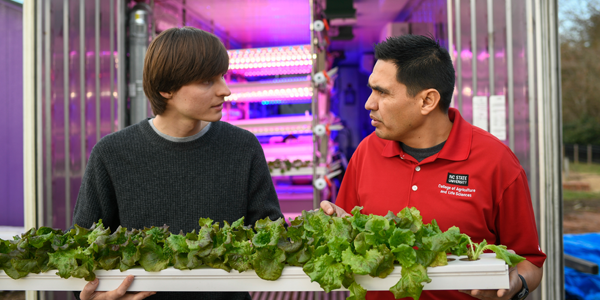 It's a crisp morning and early light creates a soft glow across the 25 raised beds that make up Todd and DelMarie Wehners' backyard garden. Covering 1/8 of their quarter-acre lot, this horticultural masterpiece has played host to pickling cucumbers, ghost peppers, grapes, watermelons, herbs and berries of all sorts. Growing their own fruits and vegetables isn't just a hobby, it's a passion based in science. And that passion is one that they hope to pass on as part of their legacy.

Todd Wehner, William Neal Reynolds Distinguished Professor, has been with NC State working in plant breeding for more than four decades. He's done fieldwork all over the state and the world with seed collection expeditions in South Africa, China, Central Asia and India. The results of his long career: he released 94 cultivars and breeding lines—a few of which he's tested in his own garden. He's a prolific author of journal articles, book chapters and a book, but he's most proud of the 38 graduate students, 122 undergraduate interns, and 34 visiting scientists and postdocs he's trained and worked with through the years.

Todd and his wife share a passion for education as well as horticulture. After careful consideration, they decided to include a gift to the College of Agriculture and Life Sciences through their estate (commonly referred to as a legacy gift, planned gift or deferred gift). They worked with NC State's planned giving office to establish The Dr. Todd C. Wehner and DelMarie Wehner R.T. (R) (M) Horticulture Fellowship Endowment. When realized, it will benefit graduate students enrolled in the Department of Horticultural Science.

"We'd like to give back, to pay it forward to ensure that our food supply keeps going strong," explains DelMarie. "We would like to help with NC State because of the great work they do for the community."

"We both grew up in working class families, so we gained a lot from going to college and so have our children," agrees Todd. "We would like to make sure that others have a chance to do the same. We'll help students who need fellowships and we'll support agriculture."

The Wehners; are not the only faculty who are ensuring opportunities for others with a legacy gift. Steve Lommel, Director of the NC Agricultural Research Service and William Neal Reynolds Professor of plant pathology also has set up a gift to NC State through an estate plan.

"I'm interested in seeding some great ideas," says Lommel, who established the Marie and Steve Lommel Innovation Fund via an endowment with his wife, Beth.

"I've been with NC State for 33 years and had a thriving and prosperous research career. I ran a lab for over 25 years before moving into administration and I love research," explains Steve. "We decided to give back to support exploratory blue-sky research in plant sciences and agriculture."

"I've always been a science person and education is very important to me," says Beth, who worked in hospitals nearly all her career. "It was important to me to mentor new employees and see that they get into supervisory positions. I hope we train some female students who go into science careers."

Sarah Ash, Professor Emerita of Nutrition, has given to NC State generously throughout the years and a legacy gift was a natural extension of her relationship with the community.

"The University became my family," she explains. "Some of my closest friends are my colleagues in the university, across departments."

In her time with NC State, she came to appreciate that often students didn't come from a lot of money, many were first generation college students. The focus of her giving has been to aid student opportunity and her planned gift will continue that.

"I encourage faculty to realize that there are many ways to give. There are some things that don't take as much money as say an endowed professorship takes. Give to a scholarship fund, or give cash," says Ash. "There's so much good that happens in a lot of different ways on the campus, so many ways to give and touch the university community."