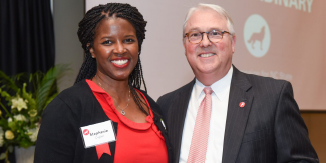 In a 1995 issue of Nubian Message commemorating the legacy of Augustus Witherspoon at NC State and the dedication of the Witherspoon Student Center in his memory, alumna Stephanie Cogdell wrote, "He's been a mentor, role model and someone who challenged me constantly. ... He touched almost everything that I was involved with." Stephanie continues to honor Witherspoon, the second African American to earn a Ph.D. at NC State and the university's first African American professor, as well as Lawrence M. Clark, who served as associate provost and professor of mathematics in the College of Education and was instrumental in developing campus programs focused on African American student experiences.

In 2017, Stephanie established a planned gift to benefit the Black Alumni Society's Augustus Witherspoon Graduate Scholarship Endowment and Lawrence M. Clark Memorial Undergraduate Scholarship funds. She felt compelled to support both these scholarships as the result of the support she received from both men during her time as an undergraduate and after graduation. "I was very close to both [Witherspoon and Clark]. They helped me get through school," Stephanie said.

In addition to the Witherspoon and Clark scholarship endowments, her planned gift will also support the College of Humanities and Social Sciences and the women's basketball program. And more recently, on NC State's Day of Giving held this past September she increased her planned gift to include support for the African American Cultural Center Enrichment Fund and the Preserve the Pack Athletic Fund.

Cogdell, a Raleigh resident who graduated in 1992 with a bachelor's in psychology, can still be found on campus providing encouragement and support to students — just like her mentors did. Through her annual giving and now planned giving, Stephanie is helping ensure students have the tools needed to succeed.

"It's a good feeling to be able to give back in this way," she said. "You have to leave what you have to someone. Why not leave it to the university, where your name will be remembered? A planned gift is a way to leave a legacy."