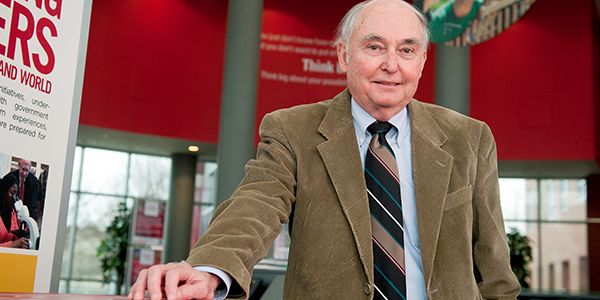 If you ask Dr. Larry E. Warren ('66) of Clinton, NC, to tell you his life story, he'll say that he might do it all differently if he could go back, but one thing he'd never change-attending NC State.

"One thing I always knew is that I was going to go to college, and I always had in mind to go to NC State," Dr. Warren said.

Although Dr. Warren went on to earn a PhD in chemistry, a medical degree, and then-after 20 years as a doctor serving low-income patients-a law degree, he credits his time at NC State as an undergraduate with some of his most important developmental experiences.

Now, Dr. Warren hopes to give future generations of Clinton High School students the chance to have similar experiences.

Through his estate plans, Dr. Warren will fund an endowment that will support merit-based scholarships, with a preference for financial need, for students from Clinton High School who have shown strong character and an interest in social ethics and justice.

"Going to college is so much more expensive now. I hope to give a student who came from a similar situation the opportunity to go to State," he said.

Dr. Warren's scholarship will support a student of any major. "Providing a restricted scholarship might force someone into a curriculum they aren't suited for. I don't want to do that," he says.

Overcoming the obstacles and personal challenges most students face in college is a critical aspect of personal development, no matter what major a student chooses.

"The challenges I faced at State prepared me for the rest of my life. It was character building," he said.

Dr. Warren had his first experience at NC State as a Clinton High School student when he attended an advanced chemistry program during the summer of his junior year.

"This was my first experience away from home," he said. An experience that he believes helped him prepare for his freshman year at NC State.

Although excelling in high school, the transition to a university with an enrollment greater than the population of his home town was not easy.

Dr. Warren placed into advanced calculus and chemistry, but found he needed to drop back into regular chemistry. Then he failed his first English composition and saw one of his roommates drop out of school.

In addition to academic challenges, ROTC was required as was physical education including swimming and gymnastics. "What an accomplishment that was when I first figured out how to swing to the top of the parallel bars. That was a bigger accomplishment than getting an A in calculus," Dr. Warren said.

Despite what was a challenging year, Dr. Warren finished his freshman year with a 3.4 gpa and a growing sense of confidence.

During a public speaking class, Dr. Warren performed a speech by noted 19th century orator Robert G. Ingersoll, and his fellow students voted him best speaker. In a second speaking class his professor praised him, saying, "Warren, you're a good student. I have enjoyed having you."

"These things mean something to you," Dr. Warren said.

Today, Dr. Warren is rehabilitating his mother's childhood farm in Clinton and is part of a conservation program to grow long-leaf pines. But it his gift to NC State that he hopes will preserve his legacy in perpetuity. "After attending State, a person will be a contribution to society. I don't think anybody could go wrong by going to State," he says.