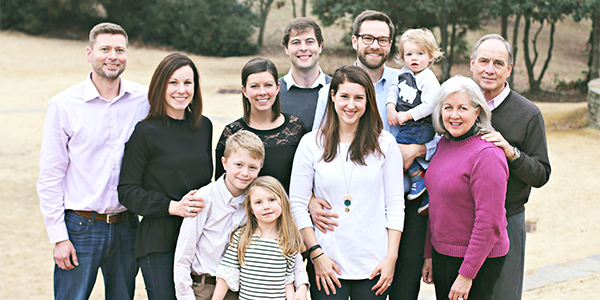 In 2018, College of Engineering Alumnus Dr. Tony Sigmon and his family gave back to the Pack by donating a piece of real estate to the college to help make Fitts-Woolard Hall a reality.

Explaining the family decision to invest in the college, Sigmon said, "I think (NC State) changed the trajectory of all of our lives. I think it's a debt in some respects that we would like to repay. Certainly, what we were taught there has helped us in so many ways to work through problems to arrive at a solution. So, it really has affected us professionally as well as personally."

Sigmon and his family are enthusiastic Wolfpackers. Sigmon received his bachelor's, master's and doctoral degrees in engineering science and mechanics from the College of Engineering in 1974, 1975 and 1977, respectively. Both of his children, their spouses and his stepdaughter and her husband also graduated from NC State.

He has three grandchildren being primed for the Pack. A grandchild's t-shirt displaying the words, "Raised by a Pack of Wolves," could be a family motto.

An entrepreneur at heart, Sigmon started his company in 1994, Collegiate Capital Management, headquartered in Raleigh, after working as an engineer at RTI International for 12 years and receiving his M.B.A. from Duke University. His allegiance to NC State has never wavered.

His two children and one son-in-law also hold positions in the company. His son, Daniel Sigmon (Textiles Management '08), is vice president of financial planning; his daughter, Erin Capps (Biological Sciences '04), is the firm's director of compliance; and her husband, Cory Capps (Business Management '03), is vice president of investment management.

"I think it's noteworthy that even though we all graduated in different disciplines, the problem-solving ability and perseverance we learned at the University have played an important part in helping us achieve a measure of success," Sigmon reflected.

Why consider a charitable gift of real estate to NC State?

A charitable gift of real estate may allow you to make a much larger gift to NC State than you thought possible. It could provide you with a significant tax-savings opportunity - especially if the land has appreciated greatly since the time you acquired it or if it is a burden with high carrying costs. You may avoid paying capital gains on the sale of the real estate and receive a charitable income tax deduction base on the land's value at the time the gift is made. In addition, you can leave a lasting legacy to NC State just as the Sigmon family has done.

Dr. Sigmon has also established a life insurance policy naming the college the owner and beneficiary. When proceeds from the insurance policy are received, scholarships in the College of Engineering and university wide will benefit.