Gifts That Keep on Giving 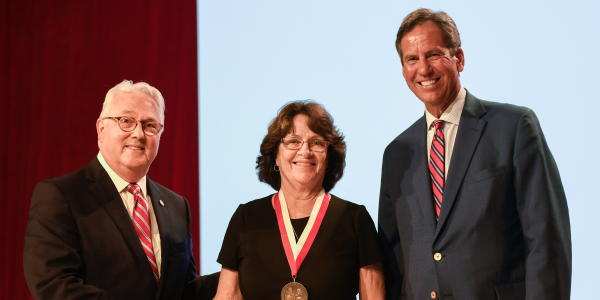 NC State Chancellor Randy Woodson, left, and Board of Trustees Chair Stanhope A. Kelly, right, pose for a photo with Suzanne Gordon after presenting her with the Watauga Medal, NC State's highest non-academic award.

Gifts That Keep on Giving

For Suzanne and Ralph Gordon, two tax-smart giving options offered the perfect ways to support their alma mater - then, now and always.

The Gordon family has always had a strong bond with NC State, and it has only gotten stronger since they each graduated from the university.

Suzanne and Ralph Gordon are both Wolfpack alumni. So, too, are their daughter, Emily; son, Stuart; and daughter-in-law, Kelley. Together, they have made numerous donations to NC State over the years, supporting a wide range of colleges and programs.

Beyond the Gordons' monetary gifts to NC State, several family members have also served on boards and committees in the College of Education, the College of Sciences and the College of Engineering. Among many other roles Suzanne has filled across the university, she was the first female president of the Engineering Foundation Board and is currently a member of the visionary Wolfpack Women in Philanthropy group.

However they have chosen to give back, staying connected with their alma mater comes naturally for the Gordons. Two of their most impactful and tax-smart gifts came through the family's partnership with the Office of Gift Planning.

Home Is Where the Pack Is

Suzanne and Ralph were thrilled when Emily and Stuart chose to enroll at NC State, and they made their rental duplex in Raleigh available to them so they would have an affordable place to live during college and after graduation.

When Emily and Stuart moved out, Suzanne and Ralph considered selling the duplex on their own. However, the Gordons talked to NC State's Office of Gift Planning team and learned how they could benefit the Pack, avoid the hassles of selling real estate and save on their taxes all at the same time.

The results: The Gordons satisfied their pledges; bolstered the College of Sciences Excellence Fund, which enables students and faculty to make life-changing discoveries in the biological, mathematical and physical sciences; and contributed to their Gordon Family Scholarship Endowment, which supports students in the College of Engineering.

Suzanne and Ralph have also created a donor-advised fund (DAF) that frequently benefits NC State through their directed distributions.

Contributions to DAFs can be invested in a wide range of investment options. All growth is tax-free, which may allow for larger gifts, and all contributions may be eligible for an immediate tax deduction.

In addition, when donors contribute long-term appreciated securities or real estate to a DAF, no capital gains taxes are triggered, and the full fair-market value of the securities could be available for giving.

Donors can also create a DAF directly with NC State through the NC State Donor-Advised Giving Fund, with the Office of Gift Planning team available to guide them through the process.

NC State had not yet begun its partnership with Renaissance Charitable Foundation, Inc., when the Gordons started their DAF, so the family created its DAF through the Charles Schwab Corporation instead. This allows the Gordons to give to numerous funds across NC State, and to the various charities they support outside the university, via just one fund.

No matter the areas they choose to support at NC State or the methods they use, the Gordons view giving back to the university as a worthwhile investment that will pay extraordinary dividends for the Pack in the years to come.

"Giving to NC State, you're helping students who are going to become the problem-solvers of the world," Suzanne said. "That's just the kind of people NC State attracts."