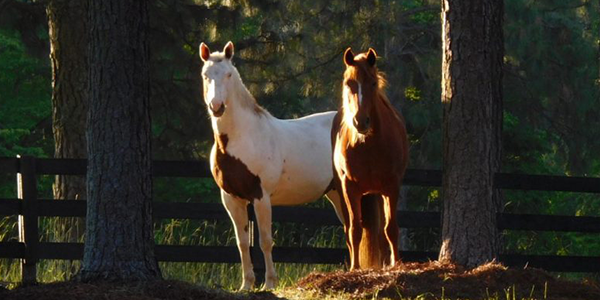 Mike and Mary Jo Matthies of Aberdeen, N.C., call themselves "just ordinary people." But their support for the North Carolina State College of Veterinary Medicine is anything but ordinary.

And it's guided by a deep love of horses.

Mary Jo Matthies has enjoyed having horses in her life, and the couple even acquired a horse while living in Germany in the 1980s, a Trakehner named Aspasia. In 1997, Mike Matthies retired from the Army, and guided by his' fondness for golf and Mary Jo Matthies' devotion to horses, the two moved to a horse farm in Aberdeen, in the heart of the Sandhills and a stone's throw from Pinehurst.

The couple now keeps about three or four horses, primarily because they simply love of the animals — racing or breeding were never part of the equation.

This love for animals isn't limited to horses. The Matthies household has always had room for a variety of dogs and cats. Many have been rescues, including the horses.

In 2014, one of their quarter horse's named Max, began showing signs of abdominal distress. Their first thought was colic, the digestive disorder that's the bane of horse owners everywhere. An emergency visit from their local veterinarian resulted in a referral to the NC State Veterinary Hospital.

"We were told we had six hours to either get the horse to NC State or put him down," said Mary Jo Matthies. "We didn't even have a horse trailer."

They managed to borrow a trailer and get Max loaded for the trip to Raleigh while their vet notified hospital personnel that an emergency was headed their way. When the Matthies were about 10 minutes away from NC State they called to say they were almost there.

"When we got there, there were six people waiting for us in an emergency room," Mary Jo Matthies said. "They took over and went right to work. They were amazing."

Then came a surprise. A thorough examination revealed that the problem wasn't colic. It was lymphoma. Lymphoma is a cancer that begins in infection-fighting cells of the immune system, called lymphocytes. These cells are in the lymph nodes, spleen, thymus, bone marrow, and throughout the body. Although rare in horses, it can and does occur at any age. In Max's case, the symptoms included loss of appetite, weight loss and abdominal pain.

"They kept Max there for three days and two nights and did the best they could for him," Mary Jo Matthies said. "They were great about calling to keep us updated."

In the end, there wasn't much that could be done for Max. He was returned to the familiar surroundings of home, where he lived another four months.

Despite the disappointing outcome, the Matthies remained impressed by the skill and caring of the CVM's equine veterinarians. In 2017, they adopted a mare, Kassies Blue, from the CVM's Equine Health Center at Southern Pines.

It was also during that year that the Matthies decided to get serious about creating an estate plan. The couple, who have no children, had already decided to bequeath some of their assets to their church and to Colorado State University, where Mike had taught ROTC.

Then they reflected on the extraordinary care and professionalism they had experienced at the CVM.

As they began to talk about options with the college, they toured the Intestinal Regenerative Medicine laboratory of Liara Gonzales, assistant professor of gastroenterology and equine surgery. Gonzalez focuses on developing innovative stem cell-based treatments for intestinal diseases, solutions that have potential to help both animals and adults with debilitating conditions.

They marveled at the cutting edge work.

As a result, Mike and Mary Jo Matthies decided to make a $500,000 bequest in support of scholarships for students focusing on equine medicine and for equine research at the NC College of Veterinary Medicine.

"We wanted to support NC State any way we could," Mary Jo Matthies said. "They were so important to us when we needed them." After their tour, they were even more impressed. It made their decision easy.